While it seems like things are starting to get back to normal in New York City, Brooklyn has been “crazy, yet completely uneventful all at once,” says Brooklyn resident and plasma donor Darian Sundberg. Film and TV work is now allowed to resume production, which means many of those out of work in the area will be able to start their jobs again and school boards across the city are figuring out what their upcoming school year will look like for teachers and students. For Darian and many others, this comes with a fear of the spread of coronavirus. However, for Darian, he’s already experienced what having coronavirus is like, firsthand.

Darian tested positive for coronavirus in April. ”I was only sick for a day. I had a fever for a 24-hour period, chest pains, massive headache, and a slight cough for a few days after. So, on the scale of how people are reacting to the virus, I made it out pretty well,” says Darian. “Afterwards, I felt like everyone was walking around in masks and while I still wear a mask, after I fully recovered, I felt invincible in some way. I felt secure.”

Darian says that at that point, the news and the studies he was seeing were saying that it could be up to a year for a potential vaccine, that there are different strains of the virus, and it was unclear how effective a vaccine would even be. “When I heard that, I tried to picture what a plan for reopening the world could even be, and there really isn’t one. I mean, if it’s worth closing schools then it’s getting worse, it’s not worth it. I heard the news and articles saying people were dying on ventilators and how they’re trying to find ways to treat this disease, and then I heard how they’re injecting antibodies of those who had coronavirus into others through plasma, and I thought that was a great idea and wanted to be a part of it.”

“I couldn’t give plasma right away, I had to be clear of symptoms for one month, so I waited but I kept following along with the plasma process and it seemed like people were getting positive results,” he says. Darian called around his area to find a place to donate. First he called Mount Sinai, then made calls to the nearest Red Cross center in Princeton, NJ, which was booked for two months in advance. At the time, Darian said he wasn’t sure of other centers to donate, so he travelled to Virginia to go to a center near his sister.

“I gave blood once in high school, and going in, it was fine. However, when they took the needle out, it was awful, it hurt, and it put me off of donating again,” says Darian. “That was a long time ago, and now this is the first time I’ve donated plasma, and I wasn’t sure what the process was exactly going to be like."

Darian traveled to the Red Cross plasma donation center in Virginia. “When I arrived at the building, they scanned my temperature going in and it read 93 degrees, which is cold. They tried again and it came up 94.1 degrees. I wasn’t sure what to think about that, but they let me in. I signed in and when the doctor came to me, he took my temperature again after saying ‘Those things never work, and everyone touts them as the new age. Everyone who uses them knows they don’t work.’ Which was kind of alarming, seeing as how so many people are using them.” His temperature was 98 degrees when the doctor took it. They then conducted a few tests to make sure Darian was able to donate. From there, they hooked him to the machine to collect the plasma and platelets. “The way it worked was it came out one arm, went into the machine, then what was left went back into the other arm. I couldn’t move my arms or hold my phone, but they had a tv with Netflix that I could watch.” 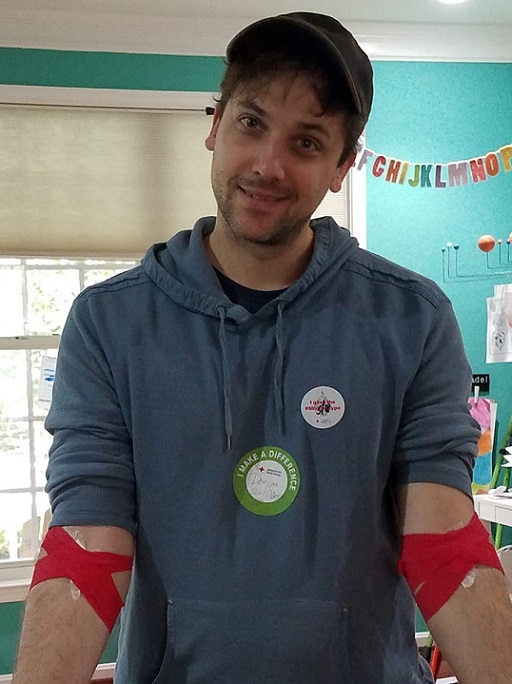 The whole process took about two hours. “In the last 40 minutes, I did start to get pretty cold, because the blood that returns into you goes back in at room temperature, not your body temperature. But they told me going into it I would and gave me a blanket, which was nice. Afterwards, they unhooked me. I had no lightheadedness or dizziness at all. I expected to have that after it was over, but I didn’t feel any imbalance, which was nice because I had to go drive. I felt comfortable and safe, and I think it’s important to note that you can go alone and drive yourself home without the fear of passing out,” says Darian. “But, I still ate cookies, anyways,” he laughs.

Overall, Darian says that donating plasma was a very positive experience in every way. He felt comfortable, felt the center staff was incredibly kind, and made sure you had everything you needed. “Plus, you’re in a room with other people who are there to donate and help. You’re in a room with like minded and community oriented people who are trying to make the world a better place.”

Darian says that he will give again and regularly once he finds a place that’s a little closer to Brooklyn than Virginia. He says his next appointment to donate plasma is in August.

“They sent me an email that my plasma was used in Bethesda, Maryland almost immediately. Which was really cool to hear that it was helping someone,” he says. “I feel like I have the cure in me, and so I can help be the cure for someone else, which is how I like to think about donating plasma.”

To learn more about donating plasma or to find a donation center near you, visit: plasmahero.org.